A Talk by Matthew Noah Smith

Associate Professor of Philosophy, University of Leeds
and Director, Program in Philosophy, Politics, and Economics 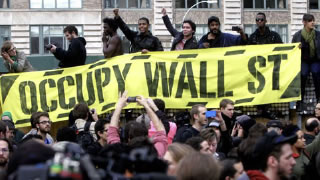 The Occupy movement was greeted with joy in 2011. Three years afterwards, how should we understand it? Smith proposes that Occupy failed to offer a substantive challenge, both in action and in vision, to today’s dominant neoliberalism. By developing an account of what he calls ‘reliance structures’ – structures that facilitate power and action – Smith argues that Occupy, and more generally we, still lack a significant alternative vision to the current state-and-capital structures that dominate the contemporary economy. This talk is a mix of philosophy, political economy, and reflections on occasional participation in NYC’s Occupy activity. All are welcome!

Sponsored by the Department of Philosophy’s Ethics Table, Inamori Center, and the Center for Policy Studies.

Previous
Next
Scroll To Top