In January, China announced intentions to establish a permanent presence in the Arctic—dubbed the “Polar Silk Road”—to dramatically reduce the time needed to move goods between Asia and Europe.

With details in short supply from Beijing, other nations and industries are eager to fill in the blanks, including a team of researchers—funded by the Danish Maritime Fund—of which Kathryn Lavelle, the Ellen and Dixon Long Professor in World Affairs at Case Western Reserve University, is a part. 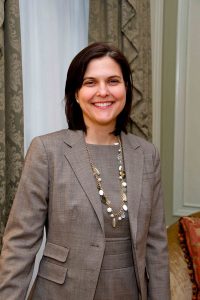 “Climate change is remaking our shipping map in real time,” said Lavelle, “and China is aiming to become dominant in a region where they’re only bit players.”

The United States and Russia constitute most of the international presence in the Arctic. Yet, in recent years, China has made no secret of cozying up to Russia in hopes of drawing on that country’s built-in advantages, such as port access and icebreaking vessels;  Russia has 40 such crafts—the U.S. has just two.

“Understanding China’s interests in the Arctic will help us better determine US interests going forward,” said Lavelle, who will bring her international trade and finance expertise to the project and draw on her relationships in the U.S. policy community.

Beginning in January, and aiming to conclude by next summer, the research team will present its findings to Danish commercial, military and maritime interests. The team hopes to also attract the attention—and inspire urgency—in other nations.

“China’s growing role in the Arctic and beyond should be a topic of conversation among leading Western political decision-makers,” said Lavelle, a global fellow of the Woodrow Wilson International Center for Scholars in Washington, D.C., “but it’s not. We’re trying to fill a vacuum of information.”

For her part, Lavelle will focus on Chinese trade patterns and investigate how specific industries, such as steel, oil, gas and deep-sea resource mining might benefit from expedited shipping offered by access to the Arctic.

The Arctic ice melt, which is expected to accelerate given pollution and warming trends, could disrupt the very balance of international relations and trade in the near future, Lavelle said—especially over rights to newly accessible minerals and fuels.

“Once extracting natural resources becomes more viable and efficient,” said Lavelle, “you can’t expect everyone to automatically agree on who gets what. It won’t be an accident which nations will be best positioned to take advantage.”

According to its site, the Danish Maritime Fund is “is promoted through financial support for research, technology and product development, training, recruitment and other types of initiatives with a maritime focus.”