Women’s History Month continues with celebrations and events. It is worth noting that CWRU has its own women’s history.  Among the many eminent female scholars and professors and alumni of CWRU and of our own department, I write today only about one:  Flora Stone Mather.

As reported in The Encyclopedia of Cleveland History, Flora Stone Mather was born on April 6, 1852, and died on January 19, 1909.  She was

“In 1896, Mrs. Mather founded Goodrich House in honor of her childhood pastor, Rev. Wm. H. Goodrich, also supporting its outgrowth activities, including the LEGAL AID SOCIETY OF CLEVELAND and CONSUMERS LEAGUE OF OHIO. Mrs. Mather supported many activities of Western Reserve University, including the Advisory Council, College for Women (renamed Mather College in her honor in 1931), and Adelbert College. In 1892 she constructed Guilford Cottage (later Guilford House), a dormitory on campus named in honor of her former teacher, LINDA T. GUILFORD†. She gave funds in 1902 to construct Haydn Hall, in honor of Dr. HIRAM C. HAYDN† of Old Stone Church, to which Mrs. Mather belonged for her entire lifetime. Mrs. Mather died in 1909 at Shoreby, the family’s lakeshore home in BRATENAHL. Her will included bequests to over 30 religious, educational, and charitable institutions, including funds to complete AMASA STONE CHAPEL on the WRU campus, which she and her sister, Mrs. John Hay, gave in memory of their father. In 1913, a women’s dormitory, named Mather House in her honor, was given to the university by alumnae and friends.” 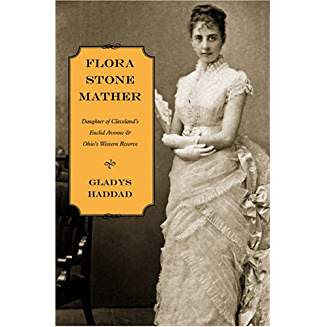 Our department, as well as those of Art History and Art, Classics, and History, is housed in the former dormitory named in her honor. For more information about Flora Stone Mather, see Gladys Haddad’s biography of Mather, Flora Stone Mather: Daughter of Cleveland’s Euclid Avenue and Ohio’s Western Reserve.
Save the Date!  Kevin Reuning (CWRU POSC 2010) is returning to CWRU on March 29.  Kevin is currently completing his doctoral work as a graduate student in the Department of Political Science at the Pennsylvania State University.  This past summer, Kevin was back in Cleveland with a research team from Penn State (headed by my co-editor and colleague Professor Lee Ann Banaszak), surveying protesters at the Republican National Convention.  Kevin was also a student in POSC322 Political Movements, and he will be speaking to this year’s class on Wednesday, March 29, in Thwing 302, at 12:45pm.  He will also be speaking in Mather House 100 at 4:30pm that same day, on graduate school and graduate studies in political science.  All POSC students are welcome to attend.  Please add this event to your calendar if you are interested in meeting Kevin (or in learning more about graduate study in political science).

I hope everyone continues to enjoy the last few days of Spring Break!

A Future That Belongs to Us All
March 21, 12:00p.m., Trinity Cathedral
Join Michael J. Sandel, Ph.D., Anne T. and Robert M. Bass Professor of Government at Harvard University, for a conversation on the most significant moral and political issues of our time.

Artist as Activist: The Green Book and Artist Imani Roach
March 21, 6:00-7:15p.m., TVUC Senior Classroom
Emerging artist Imani Roach will discuss Havens, her new exhibit at SPACES.  Deidre McPherson, curator of Public Programs at MOCA Cleveland, will moderate the conversation and examine how artists can use their talents to make personal and public statements for social change.

The Impact of State Budget Cuts on Northeast Ohio Communities
March 21, 7:00-8:30p.m., Cuyahoga County Public Library Parma-Snow Branch
The state budget has been cut recently. This lecture examines the impact of those cuts on the communities of Northeast Ohio.

Food Chains
March 22, 7:30-9:30p.m., Strosacker Auditorium
This film portrays the struggles farmworkers in Immokalee, Florida, while they launch a hunger strike at the headquarters of Publix supermarkets to protest their poor wages and working conditions.

Fear and Silence in Burma and Indonesia
March 23, 11:30-12:45p.m., TVUC Senior Classroom
This lecture will discuss the comparative case analysis of two historic national tragedies in Southeast Asia: one in Burma, the other in Indonesia. The two case studies illuminate how the social and political landscape, following traumatic events, can be shaped to allow victims of trauma to thrive, rather than recede into silence.

Improvising IRS Charity Oversight: Responsible Congressional Delegation, Responsive IRS Rulemaking
March 23, 4:30-5:30p.m., Moot Courtroom
This lecture will clarify how the accusations on the professional integrity and political bias of the IRS are unfair or at the least deeply misguided.

Behemoth
March 23, 6:45p.m., Cinematheque
This Chinese documentary depicts the human and environmental destruction caused by coal mining in Inner Mongolia. Age 25 and under tickets are $7.

Drug Problems: Is there a solution to Ohio’s Opioid Crisis?
March 24, 12:00p.m., The City Club
This conversation will focus on possible solutions to Ohio’s current opioid epidemic and how to save future generations from addiction. Nonmember tickets are $35.

Whose Country Is This? Undocumented Migrant Children and Youth in the United States after the 2016 Presidential Election
March 28, 4:30-6:00p.m., TVUC Ballroom A
Following the 2014 surge of Central American and Mexican children across the U.S.-Mexican border and the 2016 election of a president committed to ending illegal immigration, Professor Susan Terrio of Georgetown University charts the ongoing legal, political and social challenges they face after apprehension by immigration authorities and release into U.S. communities.

AmeriCorps VISTA Program at CityLink Center
VISTA stands for Volunteers in Service to America and provides an opportunity for individuals to commit to a year of service in a non-profit agency with exposure to multiple different social services. CityLink is seeking eager young professionals who are interested in building the capacity of our current programs to serve more clients and empower volunteers, while confronting the issue of poverty within the city of Cincinnati.

FairVote
FairVote is one of the nation’s leading election reform organizations. With strong support from interns and a national network of volunteers, FairVote’s hard-working and energetic staff advances our mission: achieving “the way democracy will be.” This internship is located in Washington, D.C.

Conservation Summer Internship
The Conservation Intern will work with our Conservation staff to help create healthy communities through land conservation and restoration. This is a paid internship.

Center for Policy Advocacy Internship
Interns will work with the Government Affairs and Campaign programs. Project topics may include legislative research and memo writing. This is a paid internship and takes place in Washington, D.C.

Center for Strategic and International Studies
A variety of research internships are available associated with Asian and Middle East programs.

Previously posted opportunities can be found on the department webpage. Please make sure to check regularly as to not miss approaching deadlines!